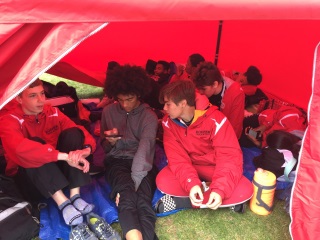 Undaunted by the cancellation of traditional sports seasons, the Middle and Upper School Track and Field teams have continued to hone their craft this spring. These self-motivated students have adapted to the new normal, reporting in at 3:45 each day to group meetings on Zoom instead of meeting at the green park bench as they normally would, and taking their training seriously once they sign off. Using the workout tracking app Strava, students have been able to meticulously track their growth over the spring months and give each other encouragement (“kudos” in the website’s parlance) along the way.

Although physically apart from one another, each athlete’s commitment to contributing to practice and participating in the various inter-squad challenges– scavenger hunts, Mario Kart races, a Jeopardy! game written entirely by junior Will Hoover– allowed the teams to compete even in absence of an organized league structure. Instead, the Middle and Upper School teams went head-to-head in virtual social distancing meets.

Spearheaded by Middle School coach Duy Mo, these scrimmages approximated the structure of a competitive dual meet and featured fierce competition. The much more numerous Middle School squad, who entered as many as 9 runners in an event, pushed the Upper School to its limit and even emerged victorious in the Discus (softball) throw and the 800 meter run. Podium toppers Hoover (1600 m., 3200 m., five-minute run, 10- minute run) and senior Chris Ban (400 m. run, second in the 200) carried the day for the Upper School, who eked out a 45-36 victory in the first meet.

The end of the season will bring a special opportunity for both teams, as program alumni Alexis Johnson and Akwia Tilton, as well as Notre Dame forward Simon Roennecke, will participate in a panel about college athletics and maintaining healthy habits in the off-season. We look forward to welcoming them back and encourage everyone to attend their roundtable on May 14th at 4 PM.

No Events This Week

Events are added by athletic staff.
View All Events